Lee Hugh Phillips was born on February 3, 1930, in Stockbridge, Georgia.  He attended school in Ellenwood, Georgia, until 1945, then worked six months painting picture frames for the Georgia Art Supply Company of Atlanta.  For more than a year he worked as a stock clerk at the Davison-Paxton department store in Atlanta (now Macys).

Cpl. Phillips was killed in action 27 November 1950. Citation: For conspicuous gallantry and intrepidity at the risk of his life above and beyond the call of duty while serving as a squad leader of Company E, in action against enemy aggressor forces. Assuming the point position in the attack against a strongly defended and well-entrenched numerically superior enemy force occupying a vital hill position which had been unsuccessfully assaulted on 5 separate occasions by units of the Marine Corps and other friendly forces, Cpl. Phillips fearlessly led his men in a bayonet charge up the precipitous slope under a deadly hail of hostile mortar, small-arms, and machine gun fire. Quickly rallying his squad when it was pinned down by a heavy and accurate mortar barrage, he continued to lead his men through the bombarded area and, although only 5 members were left in the casualty ridden unit, gained the military crest of the hill where he was immediately subjected to an enemy counterattack. Although greatly outnumbered by an estimated enemy squad, Cpl. Phillips boldly engaged the hostile force with handgrenades and rifle fire and, exhorting his gallant group of Marines to follow him, stormed forward to completely overwhelm the enemy. With only 3 men now left in his squad, he proceeded to spearhead an assault on the last remaining strongpoint which was defended by 4 of the enemy on a rocky and almost inaccessible portion of the hill position. Using 1 hand to climb up the extremely hazardous precipice, he hurled grenades with the other and, with 2 remaining comrades, succeeded in annihilating the pocket of resistance and in consolidating the position. Immediately subjected to a sharp counterattack by an estimated enemy squad, he skillfully directed the fire of his men and employed his own weapon with deadly effectiveness to repulse the numerically superior hostile force. By his valiant leadership, indomitable fighting spirit and resolute determination in the face of heavy odds, Cpl. Phillips served to inspire all who observed him and was directly responsible for the destruction of the enemy stronghold. His great personal valor reflects the highest credit upon himself and enhances and sustains the finest traditions of the U.S. Naval Service.

He enlisted in the Marine Corps Reserve on January 17, 1948, and after six months of inactive duty, joined the regular Marine Corps on July 19, 1948.

After completing his training at Parris Island, South Carolina in October 1948, he was promoted to private first class and assigned to the 8th Marines, 2nd Marine Division, at Camp Lejeune, North Carolina. He remained with the 8th Marines for a year, serving with the regiment on Caribbean maneuvers in February and March 1949, and in the Mediterranean from May to September 1949.  He then served with Company E, 2nd Battalion, 6th Marines until August 1950, when the battalion was assigned to the 7th Marines, 1st Marine Division for service in Korea. He sailed from San Diego, California, with that unit in September 1950, and had fought with Company E in the capture of Seoul before he was killed in action.

Though he survived the action on November 4, 1950 for which he received the Medal of Honor, he was killed at Yudam-ni on November 27, 1950, during a later phase of the hard-fought Chosin Reservoir campaign

He was buried in the Marietta National Cemetery in Marietta, Georgia. 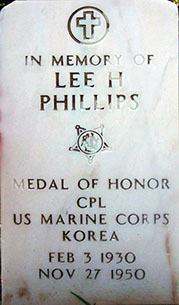