Clyde A. Thomason was born in Atlanta, Georgia on May 23, 1914, and after his graduation from high school there, traveled widely throughout the United States  with friends. In December 1934, he enlisted in the United States Marine Corps in Savannah, Georgia.

Although he was named for his father, at the time of his enlistment he dropped the "A" of his father's name and became known in the Marine Corps simply as Clyde Thomason. This was the name under which he enlisted in 1934 and was the name subsequently used in official Marine Corps records.

For conspicuous heroism and intrepidity above and beyond the call of duty during the Marine Raider Expedition against the Japanese-held island of Makin on 17-18 August 1942. Leading the advance element of the assault echelon, Sgt. Thomason disposed his men with keen judgment and discrimination and, by his exemplary leadership and great personal valor, exhorted them to like fearless efforts. On 1 occasion, he dauntlessly walked up to a house which concealed an enemy Japanese sniper, forced in the door and shot the man before he could resist. Later in the action, while leading an assault on an enemy position, he gallantly gave his life in the service of his country. His courage and loyal devotion to duty in the face of grave peril were in keeping with the finest traditions of the U.S. Naval Service.

He served in the Marine Detachment of the USS Augusta, Flagship of the Asiatic Fleet, and was honorably discharged in 1939 upon the expiration of his enlistment. The day following his discharge, he was retained in the Fleet Marine Force Reserve.

When he again became a civilian, he accepted a position with the Albany, Georgia, branch of the Fire Companies Adjustment Bureau, Inc., and Albany became his home in February 1940.

Thomason re-enlisted in the Marine Corps Reserve in January 1942 following the attack on Pearl Harbor. He asked for action, and when Lt.Col. Evans Carlson was organizing his famous Raiders, Thomason volunteered.

He wrote of his commanding officer, Lt.Col. Carlson, and of Maj. James Roosevelt, second in command. Lt.Col. Carlson thought so highly of Sgt. Thomason that he selected him to lead the advance element against the Japanese at Makin. It was there that Sgt. Thomason's gallantry in action earned him the Medal of Honor.

Sgt. Thomason was one of 30 Marines who did not return from the Makin Island Raid.

In November 1999, researcher discovered a mass grave on Makin Island that contained human remains, equipment, and dog tags belonging to Marine Raiders. Sgt. Thomason's remains were among those identified. His remains were returned to the United States and were interred at Arlington National Cemetery. 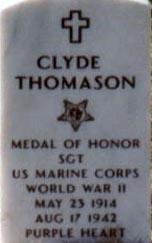